Learning Agility: Augmentation in an Age of Automation 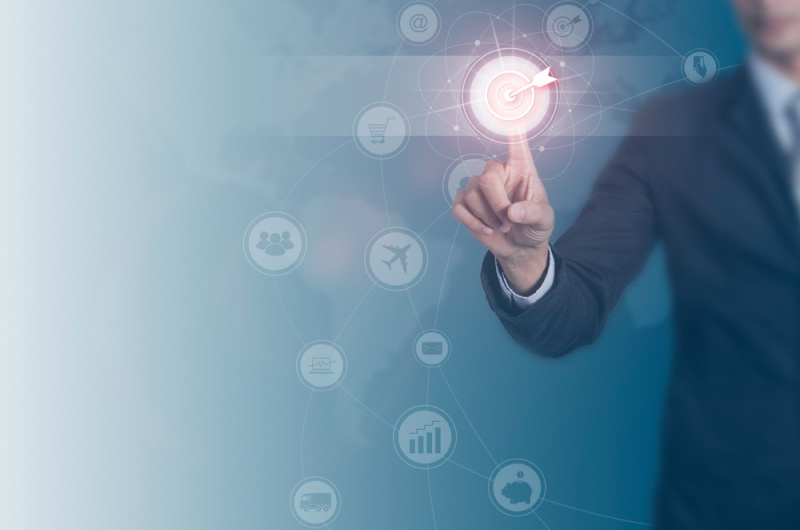 How do we survive and thrive in an era of AI, robotics and accelerated change? Is it with individual cleverness, or with a combination of teams, tools, and systems?

That’s one of the questions that has driven my ongoing exploration into learning agility. But, to answer it, there’s another obvious question to address first—and that question is, how did our ancestors hunt mammoths?

Seriously, that’s the question—keep reading, it will be worth the trip…

Picture a mammoth, lumbering through a cold, inhospitable land. As a healthy adult, it has few predators to fear—dinosaurs died millions of years previously, so its main threat is in the form of two species: humans and Neanderthals.

Mammoths were crucial to the survival of both groups—providing meat, fat, hides, bones, and ivory for food, shelter, weapons and even art.

There’s a lot we don’t know about that period. Some academics believe that Neanderthals used short-ranged weapons to hunt mammoths while humans made the shift to throwing spears. One hypothesis, although it’s recently been questioned, was that mammoths were herded off cliffs, similar to how Native Americans in later times killed bison.

There is convincing evidence of orchestrated attacks by groups of humans in various locations. In addition to working together, a recent theory suggests that some humans trained wolves, or early dogs, to help find, trap, kill, and transport mammoths. One anthropologist went so far as to refer to this combination as the rise of a “new combined dog-and-human predator.”

Through the debates, most of the studies I’ve reviewed implicitly agree on one answer to the question how did humans hunt mammoths?

The answer: in teams, with tools, using systems.

Hold that thought, and let’s fast forward to a chess match in New York City during May 1997.

The player moving black, a grandmaster at the top of his game, makes an early mistake. His opponent, playing white, is quick to capitalize, and after 19 moves the grandmaster concedes defeat.

The grandmaster was Garry Kasparov, often cited as the best chess player the world has seen. Kasparov’s losses were rare enough, but what made this defeat unique was that his opponent was IBM’s Deep Blue computer.

Deep Blue went on to win the series, the first such victory for a computer over a grandmaster. Today, it seems a given that computers are better than humans at chess but, back then, few expected IBM’s victory.

Enter the age of centaurs

There are three key takeaways that unfolded after Kasparov’s defeat. The first is promising, the second interesting, and, for me at least, the third was mind-blowing.

The promising? Despite being outclassed by a computer, Kasparov and other chess players did not lose their jobs. It seems like a small point, but we still occasionally value humans in some roles, even where they might be outclassed.

The interesting? The computer vs. human discussion was superseded in 2005, when the chess world found itself host to the first ever “freestyle” tournament. This tournament allowed mixed teams of humans and computers to compete. Known as “centaurs,” the human-computer combinations have generally beaten computers alone.

As Kasparov himself noted, “The teams of human plus machine dominated even the strongest computers. The chess machine Hydra, which is a chess-specific supercomputer like Deep Blue, was no match for a strong human player using a relatively weak laptop. Human strategic guidance combined with the tactical acuity of a computer was overwhelming.”

Surprised? Well, I promised mind-blowing and, for me, that came when I read about the winners of that first freestyle tournament.

It wasn’t a team with a grandmaster, nor one with a powerful supercomputer. Instead, the prize went to two relative chess amateurs using three basic computers.

So how do you win at chess in an era of computers and AI?

The answer: in teams, with tools, using systems.

For those of you playing at home, you might have noticed that the story has remained the same, yet everything has changed.

Performance support and the use of tools “to get stuff done” has defined humanity. However, the nature of those tools is growing in complexity and impact.

The most obvious areas are the applications of robotic exoskeletons that support everything from factory workers becoming stronger to military operatives becoming safer (or deadlier, depending on your perspective), and even to surgeons to become more precise.

This already has massive implications for L&D. Take Amazon’s shift from a six-week training program of new holiday factory workers to a two-day program. It was achieved with the help of packing robots who gathered relevant items and provided just-in-time touch screen support for workers to finish the job.

The less obvious but more pervasive version of augmentation is happening in our workplaces and homes. Take Google’s recent demonstration of Duplex, an AI-driven assistant that books reservations for haircuts and restaurants in conversational language.

Google is also ramping up its integration of AI into G Suite. For example, over 10 percent of Gmail replies are now “machine written and human accepted.” Google Cloud CEO Dianne Greene recently commented that “We are now working to make it easy for you. We are incorporating AI into everything you do.”

Not to be outdone, Microsoft is releasing Dynamics 365, a bundle of AI-driven applications to assist with sifting data and providing insights in sales, customer service, and other areas. They’re also working on CAPERS, an AI function built into Outlook that identifies the most relevant emails to read so you can efficiently prepare for upcoming meetings.

Where does that leave humans?

When I speak to large audiences, I often ask, “What part of your work do you want to lose to robots?”

So far, everyone has wanted to lose something. For me, it’s sifting through the mountains of articles in the early stages of researching a new topic; bookkeeping; the daily email battle; and even aspects of project management.

My next question is, “How would having that work automated help you bring more of your humanity—your empathy, communication, creativity, and strategic thinking—into your work?”

I’m not alone in noting that, as technology continues to develop, it’s opening more opportunities and need for us to embrace those human aspects. And that means embracing the idea of learning and performing in teams, with tools, using systems.

In my experience, learning is too often seen as something that occurs in a vacuum, in isolation from tools and people. I love learning for learning’s sake as much as the next geek, but in a work context, the main game is performance. 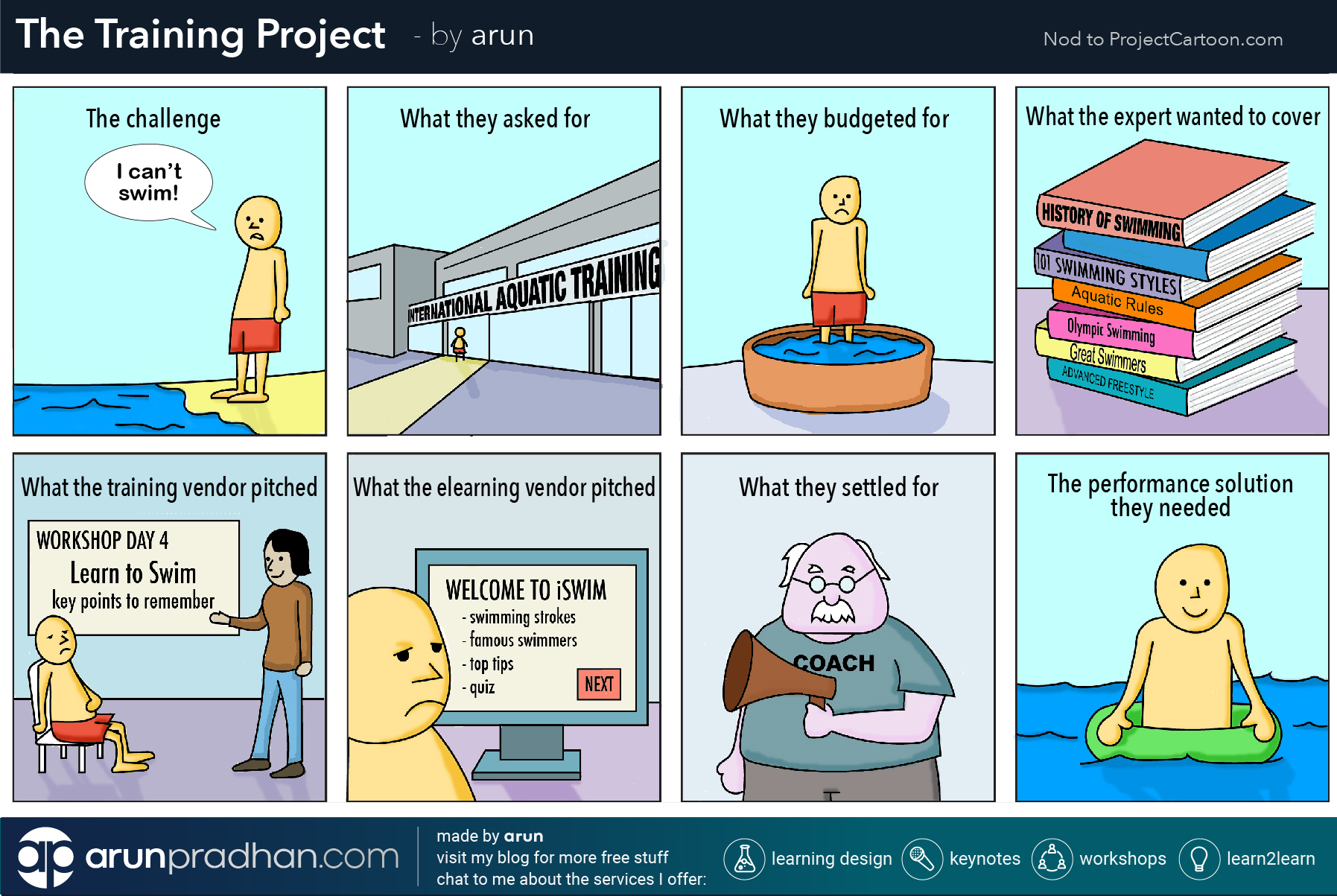 Figure 1: Six alternatives and one solution for a performance problem

Rather than jump to learning, ask, “What can you delegate? What tools and performance support can you leverage? How else can you get the job done?” Don’t just develop your way to performance outcomes, hack your way to them first.

Learning agility, then, is as much about working smart as it is about learning fast. 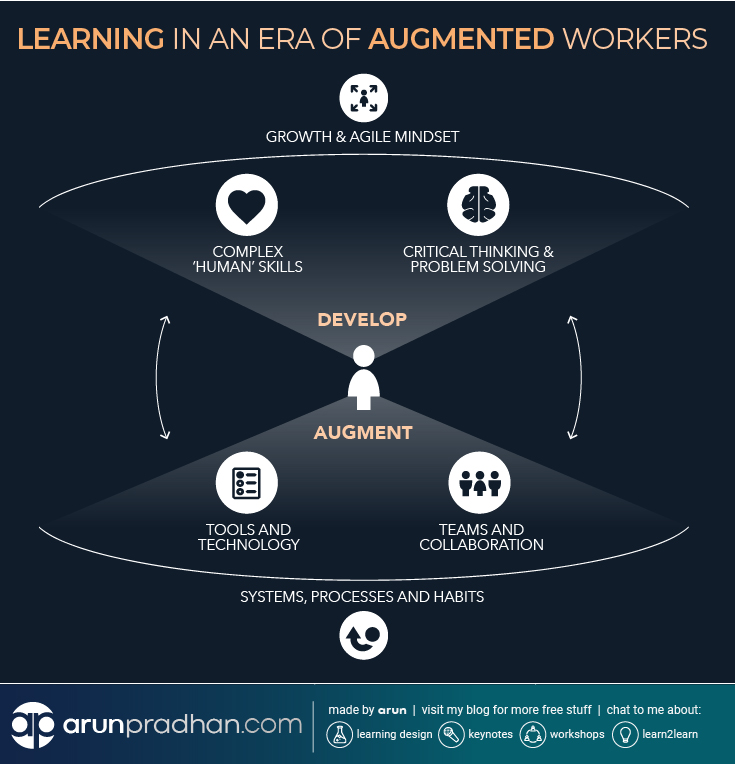 I hope it will help serve as a reminder to start by asking, “How can we augment before we invest in developing?” Doing so can help to free up learning to focus on the important stuff—extending our creative problem solving and complex human skills. Essentially it’s the stuff that allows us to pull our weight as the fleshy side of human-robot centaurs!

On the augmented side of the equation, Figure 2 emphasizes the need to establish systems and habits to amplify the impact of the tools, technology, and people.

So, whether you’re hunting a mammoth, winning freestyle chess tournaments, or about to embark on a leadership program—consider how you are making the most of your work in teams, with tools, using systems.

This article was first published on 8th Nov 2018 on Learning Solutions here.